Abstract:  To investigate people’s ability to update memory in a dynamic task environment we use the experimental card game TRACS^tm (Burns, 2001).  In many card games card counting is a component of optimal performance. However, for TRACS, Burns (2002a) reported that players exhibited a baseline bias:  rather than basing their choices on the actual number of cards remaining in the deck, they chose cards based on the initial composition of the deck.  Both a task analysis and computer simulation show that a perfectly executed memory update strategy has minimal value in the original game, suggesting that a baseline strategy is a rational adaptation to the demands of the original game.  We then redesign the game to maximize the difference in performance between baseline and update strategies.  An empirical study with the new game shows that players perform much better than could be achieved by a baseline strategy.  Hence, we conclude that people will adopt a memory update strategy when the benefits outweigh the costs. 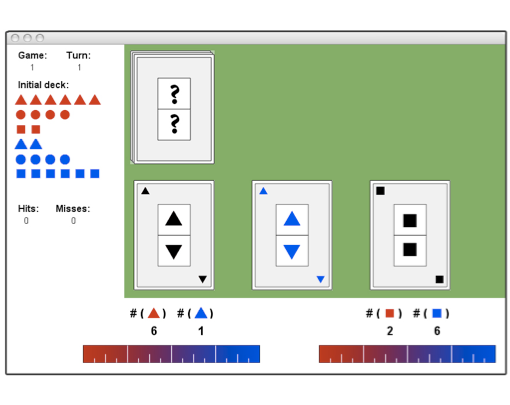